Where your drinking water comes from

The system of using groundwater is accomplished by transporting underground flows collected in the areas of Alto Vinalopó and Medio Vinalopó through a network of large-diameter canals and pipes, called generically La Traída. La Traída has a total length of close to 200 km, with origins in various municipalities in the province and ending in Fenollar de Sant Vicent del Raspeig.

The origin of this water transport dates back to October 1896, with what is now known as the Canal del Cid. The canal starts in the Prados de Remigio estate, Fuentes Calientes, in the municipality of Sax. It is a masonry canal that is 55 km long, with 21 bridges and 7 tunnels, extending towards Calderones in the municipality of Novelda. From this point to Alicante, the channelling continues with 21 km of cast iron pipes with a diameter of 400 mm.

To improve the guarantee of the drinking water supply to towns, part of the route of the Canal del Cid was duplicated in 1973. To achieve this, 9,450 m of reinforced concrete pipes with a diameter of 900 mm were assembled, running between the Almorcho Ravine in the municipality of Petrer and Calderones in the municipality of Novelda. A year later, this project continued with the installation of 4,950 m of pipes of different diameters, with a route between the three most southern tunnels of the Canal del Cid, to link with the top of the aforementioned reinforced concrete pipe. Again in the 1970s and with the same criteria of ensuring water transport, two pipes of 600 mm in diameter were constructed, starting in Calderones and ending in the southern sector of the municipality of Sant Vicent del Raspeig.

Finally, to renovate the original canal in the first five years of this century, the Canal del Cid was replaced by pipes of 1,200 and 1,400 mm in diameter, from the source in the district of Alto Vinalopó to Calderones in Novelda. 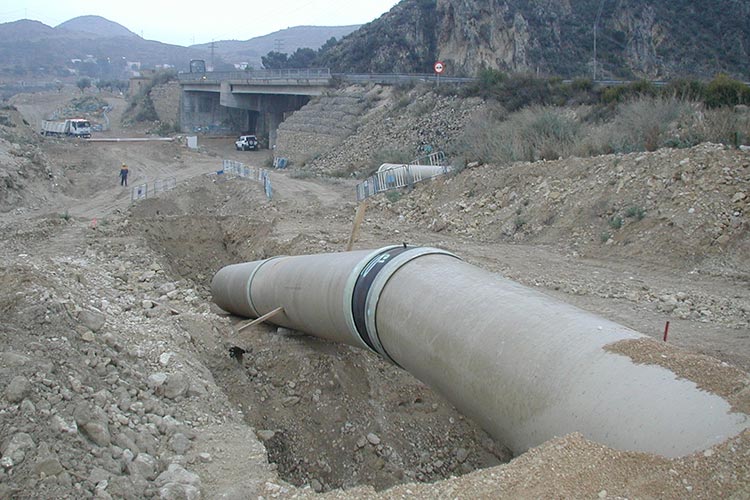